Over the past 10 years, cyclists have been told to spend as much as time as possible at or near the tough threshold pace if they want to improve (that's the maximum pace you can maintain for one hour, e.g. 300W).

For trained cyclists, this advice doesn't seem to stack up. Studies show that athletes who spent the least time at threshold had the highest fitness. Is this how elite endurance athletes train? How can recreational riders use polarized training?


How elite endurance athletes train
To explain how elites train, we first need to define some training zones. For this article, the following slide shows 5 zones ranging from easy (green) to hard (red). Information about finding your training zones is in this article. 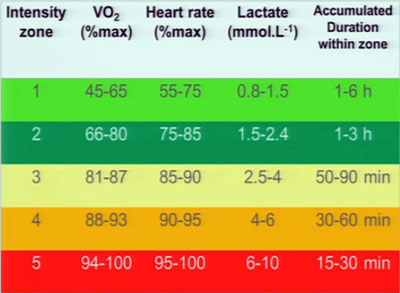 Zones 1-5. Green is the easy zone, yellow is the training black hole (threshold, tempo) and red is the high intensity zone.

Sports scientists have examined how gold medal winning elite athletes train by checking training logs and observing training in action. Here are some examples, all from an excellent presentation by Prof. Stephen Seiler.

12 Olympic / World Champions in XC skiing
90% of annual training duration was at low intensity - green – but mostly zone 1.
4% was at moderate intensity – yellow.
6% was at high intensity – red.


90% of annual training duration was at low intensity - green – but mostly zone 1 rather than zone 2.
4% was at moderate intensity – yellow.
6% was at high intensity – red.


Top marathoners (2:06 to 2:11 times)
These data are from fast marathoners. Again, look at the distribution of training load:
78% of distance was at low intensity - green
4% was at moderate intensity – yellow
18% was at high intensity – red


Very little time was spent in the yellow zone (tempo), which happens to be marathon race pace. They either trained very easily or very hard, but raced very fast at tempo pace. They did not train specifically for marathon pace. 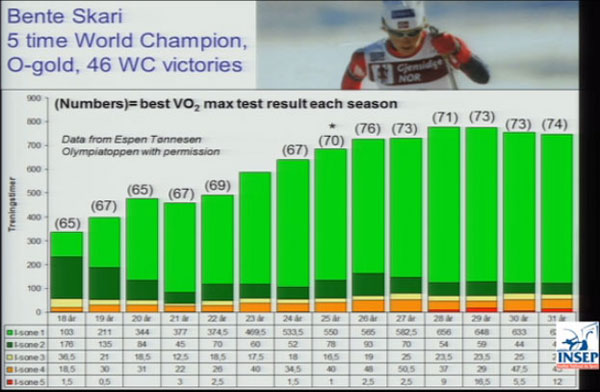 This diagram shows Bente Skari's training from age 18 until her retirement. Each bar represents a year. At the top of the bar is her maximum VO2 tested in the year. You can see how training time has doubled, but the increase is due to low intensity work.

After getting a new coach, she roughly doubled her annual training hours. Her zone 1 training increased to 80% of the total and zone 4 training was also doubled, but zones 2 and 3 were reduced. By age 26 her VO2 had increased to 76 ml.kg-1min-1.

We are often told that VO2 is fairly fixed and can't be changed much. In Bente's case this certainly isn't true, and there's a good chance that yours can be improved, too.

Ingrid Kristiansen (wikip) - 5 world records, World Champion
A similar pattern to the others is shown: 80% of training in zone 1.
During the competition phase, total volume is reduced and more work in zones 4 and 5 is undertaken. 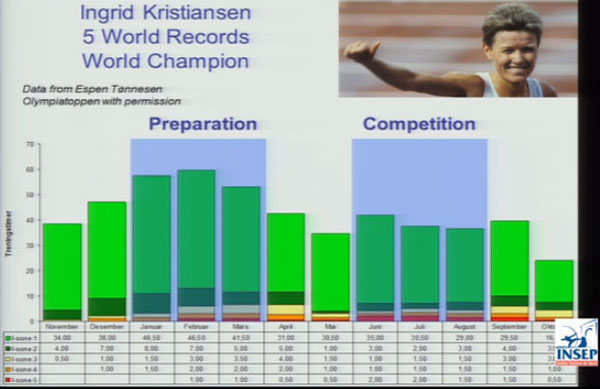 Ingrid Kristiansen did 80% of training in zone 1.
During the competition phase, total volume is reduced and more work in zones 4 and 5 is undertaken.


Cyclists - Elite under 23 Spanish squad Zapico et al
This squad contained a rider that was to go on and win the Tour de France.
Again, 78% at endurance pace, 20% in the moderate zone and 2% at high intensity over a winter period. VO2 max Watts increased from 425W to 460W after this training period.

1) Elite athletes put in a high volume of training, equating to about 100 miles per week for running, or 20 hours per week for cross country skiing/ cycling/ swimming. A total of between 600 hours (runners) 1200 hours (cyclists) and 1300 hours (swimmers) per year.

2) It is not possible to do all of this training at a high pace.
The majority of the time, around 75-85%, is spent in zone 1. The remainder of the time is in the other zones, with emphasis on high intensity. It appears that this low intensity training provides many of the adaptions required for endurance performance without over stressing the athlete.

3) There is actually an inverse correlation between time spent in zone 3 and performance. i.e. the athletes who spent the most time at either low intensity or high intensity did the best.

Polarized Training
Training at easy pace for 80% of sessions and essentially flat out for 20% of sessions is known as polarized training. It is how elite athletes train.

They were then detrained over a four week period then the groups were swapped. This study was excellent in that it eliminated the effects of different people reacting differently to training, since all athletes tried both methods.

The results showed that the polarized training method resulted in the best training adaptions.

How can I apply polarized training to become a faster cyclist?
The obvious problem is that most recreational riders have limited training time as they need to go to work and spend time with their families.

The typical response to reduced training time will be to ride as fast as possible during the available time. Commuting will be undertaken as a series of sprints between traffic lights. A three hour Sunday morning group ride will be ridden like a race. If you've hit a plateau then you need to reconsider how you train.

1) You need to make some more time to train. You might need to get up an hour earlier, or simply leave the office early a few days a week. If you want to improve then you need to decide how important that goal is compared to other aspects of your life.

You might not be able to get to 20 hours, but you could increase from say 6 hours to 12 hours.

2) Spend 80% of your training time at endurance pace. You will be much less tired after training than if you do the normal smashfest, so will be able to better spend time with work and family. This is not wasted training time even though the effort level seems 'too easy'.

Advice on how to cycle at endurance pace in this article. You might need a power meter, or at least a heart rate monitor, and you'll need to teach yourself to really rein back on the hills. Endurance training requires discipline, as it is always tempting to sit on someone's wheel if they overtake you, or to increase the pace when feeling good. Remember, you need to train slowly today, as tomorrow you will be riding hard.

Such training is also pretty boring. It generally needs to be done alone or with only one or two others. Try to accumulate as much time as you can in this zone.

3) 20% of sessions should be hard (sessions, not hours or miles). That means two hard sessions per week at most. Without the hard days, you will not make any gains. The hard days are essential, and should be performed for most of the year.

What should I do on the hard days?
A study (Seiler et al 2013) trained riders with either 4 x 16 minutes, 4 x 8 minutes or 4 x 4 minutes intervals with 2 mins rest between intervals, all ridden as hard as possible for the overall session and twice per week.

Obviously longer the interval the less hard we can ride. The study was trying to discover what was the best balance between intensity and time.

The 4 x 8 minute intervals (ridden at about 90% VO2 max) were the clear winner. VO2 peak Wattage was increased by more than 9% for 50% of the athletes after 7 weeks.


The 4 x 8 minute intervals, ridden twice per week yielded the most gains. Such intervals are very tough and you need to be well rested before doing them, otherwise they won't be effective. Since they are above threshold, you'll need a power meter to pace them properly.

Data from elite athletes show that a lot of them do their hard training at this sort of intensity, but not much above it (and of course very little in the moderate zone).

Your physiology and circumstance will be different, so use this 80-20 polarized training model as a template and make adjustments to get your best gains. Keep trying new techniques and keep testing so you know what does and doesn't work.

Conclusion
Ensure that you are fresh enough ride very hard on one out of every five rides. That means four out of five rides need to be ridden at low intensity.
Time in the easy zone is not wasted time. Numerous adaptions are still happening.

The moderate zone, also known as the training 'black hole', should be avoided. It isn't hard enough to invoke training adaptions but it is hard enough to over stress your body. This tiredness means that you can't ride as hard as you need on the hard days and may end up sick or injured.

To continue getting fitter, increase training volume by adding more hours in zone 1.

Without the hard days you will only make minor gains, if any.
4 x 8 minute intervals ridden at 90% of VO2 max appear to generate the most gains. These hard days need to be done once or twice per week.

The principle of training specificity does not seem to apply.

Everyone's physiology is different so you may need to adjust the training to invoke the greatest gains. For example, I'd recommend some light gym work to maintain core strength and muscle balance, and also would incorporate some sprints into your endurance rides.