What you eat during exercise comes down to personal preference, but generally sugar works well for a quick energy hit.

What should we eat whilst cycling? Manufacturers would have us believe that we should be eating their sports nutrition products on every ride, but this is expensive and unnecessary. 'Real' food should be consumed where possible, although commercial preparations have their place.


What you eat during cycling will depend on the cycling scenario - whether training or racing and how long the event is for. The scenarios are described below.

Training of 2 hours or less
Eat properly about 2-3 hours before the ride so you are well fueled. Eat protein, carbs, some fat. A good breakfast might be a cheese omelette and bowl of porridge, which is a favorite at team Sky.

During the ride, just drink water, perhaps bring an energy bar to munch half way through if it is quite an intense workout. It isn't necessary or desirable to drink energy drinks for short duration training.

Cyclists can tend to consume too much sugar, so save it for when you really need it.

White bread jam sandwiches and anything starchy also work well as these are rapidly absorbed. Since white bread has a very high Glycemic Index (GI), it works fantastically as an energy source whilst exercising.

A nutritionist from the 2008 Cervelo Test Team (Dr Robert Child, now advising MTN Qhubeka) tells us that it is a good exercise to perform a low power endurance rides with minimal food intake. Eat only enough carbs to maintain enough blood sugar for the brain to function. The rest of the ride should be powered by glycogen and fat reserves. This teaches the body to spare glycogen.

Carlos Sastre during the Tour de France 2008. According to his nutritionist, he would go for a 5 hour ride with only water and one energy bar in an effort to teach his muscles to burn fat and conserve glycogen.

Following this protocol, Carlos Sastre used to go for a 5 hour endurance ride with only one energy bar. He'd have half after 2 hours and the other half later, if he felt like it. In this way he was forcing his body to use fat as a fuel.

The problem with training like this is that you will feel pretty rotten during the last 2-3 hours of the ride. This feeling can be overcome to some extent by taking caffeine. It may also be beneficial to take a protein drink with you to counteract muscle wastage. (Ref: http://www.gssiweb.org/Article/sse-115-new-ideas-about-nutrition-and-the-adaptation-to-endurance-training

Racing for 1 hour
No food is necessary during the ride. Water is only necessary on hot days. You can deplete your glycogen stores (~1000 kCal in an hour of 1200 kCal reserves) if going flat out, so remember to feed straight after a big effort to aid recovery.

Racing for 2-3 hours
If the conditions are cool then take a maximum of 2 x 750ml (25oz) bottles. If hot, then perhaps 3 would be needed. You should not drink more than 800ml per hour. Drink according to thirst. There is no need to 'try to stay ahead of your thirst' by over-drinking. That's a myth perpetuated by sports drinks companies.

You might have one bottle of water and one of an energy drink, such as High 5, ZipVit etc. Undiluted energy drinks such as RedBull, Monster tend to be a bit too concentrated. Riders do often drink a can of Coke in the last 15 minutes of a race to get a quick pick up. A cold Coke on a hot day is indeed a pleasure and the strategy does work, but only at the end. It is similar to taking gels in the last hour of a long race.

Hydration should be undertaken gently in the 24 hours prior to exercise. Keep drinking water the day before. Don't drink too much or you'll be up in the middle of the night, which is counter productive.

It is OK to consume sugary drinks or foods within 15 minutes of the start, as it takes at least 20 minutes for absorption to kick in. Don't drink energy drink more than 15 minutes before the start.

A common mistake is be to sip energy drink in the car on the way to a race. Many of us think that sugar is needed for energy. This is true, however if you consume sugar while at rest, your body will release insulin which will result in temporary low blood sugar. Low blood sugar is just not what you need before intense exercise. In addition, consuming sugar while at rest can lead to bad health consequences. Consuming sugar during a race is OK as it will be burned by the muscles and insulin production is somewhat suppressed at this time.

If you need to eat before the race then have something starchy, and not too much of it to keep the GI load down. Some rice, pasta, porridge, muesli all work well.

When riding I recommend muesli bars, commercial energy bars or jam sandwiches (Matteo Carrara's favourite was white bread marmalade sandwiches). Open the wrappers a little before you pocket them so you can open them easily during the race. Nibble something every 12mi/ 20km or every 30 mins approximately. For example half a slice of white bread every 20 minutes. Wash it down with water. You can train your body to process more food when exercising and the more you can eat, the better.

Use gels for the last 40 minutes of the race. Take one at 40 mins and 20 mins to go. They should be taken with water, even the ones that claim not to require water. These gels are high in sugar and are like throwing paper on a fire - will burn brightly but not for long. You'll feel great after one of these but can start crashing after 15 minutes.

Make it your responsibility to carry all the food you need with you. There may be feed stations, but often I have found that the stop easily is missed, not stocked or the guys handing out the musettes just get lost. It is a terrible blow if you are in dire need of food but none is available.

Follow a system - bars in the middle pocket, gels in the right pocket and caffeine gels in the left pocket. That way you will know what food is where. You might start the ride looking like a bit of a camel but in a long race or sportive you will be eternally grateful to yourself for packing food to ward off hunger knock. The extra weight is irrelevant.

Remember that baggy jerseys full of food supplies, iphones, wallets, inner tubes and rain coats are cumbersome. Wear a tight-fitting jersey to keep things neater and be selective regarding what you bring. Small saddle bags are very useful in this regard.

Longer races - over 3 hours
Start the race with reserves topped up by correct eating. I do not advocate carb loading the night before, as if you are fit your body will be used to burning fat as a fuel source, so stuffing yourself the night before an event is not necessary and will just lead you to the toilet.

Repeat, bring all the food you will need with you. Don't depend on team mates or helpers to pass up the food. A few gels or bars weigh little, but will mean the difference between winning and not finishing.

Don't start on the gels too soon or they will make you feel sick and you'll soon be bringing up the sticky stuff all over your top tube. Wait until the last hour.

If you are trained, then the majority of your energy will come from fat mobilization; you can't digest 4000 kCal during a ride.

You might be burning 800 kcal an hour. Glycogen in the liver and muscles might only contain 1,200 kcal. You might be able to consume 400kcal an hour. The deficit is made up with your body's fat reserves. This needs to be trained with long rides and by not eating sugar or high GI when not exercising.

One thing I've noticed is that it is better to avoid sugary drinks until the end of the ride. For some reason, when I drink them from the start of the ride I tend to blow up. This could be because the body is deciding to not burn fat as there is so much sugar around. I recommend drinking water for the bulk of the ride, and obtaining Calories from food.


A note on Calories, kcal and Joules.

A calorie is roughly the amount of energy required to increase the temperature of 1g of water by 1C.

A thousand of those calories is a kilo calorie, also written as kcal or Calorie (with a capital C). Food packaging shows kcal. e.g. A can of Coke has 160kcal.

A long ride might burn 4000kcal, which is about 16800kJ.
However you might notice that your powermeter will report something like 4000kJ of work done which is only a quarter of what you might expect. Why the difference?
You need to remember that the body is only about 20-25% efficient, so to perform 4000kJ of work you will need to burn about 16000kJ. 75%-80% of the energy is used for digestion, cooling, thinking, moving blood around etc. The fitter you are, the more efficient you'll be.

It is handy that there are about 4 joules in a calorie (4.18), so as a rule of thumb, the joules reported will be about the same as Calories (kcal) burned.


Bento boxes
These are the little boxes velcroed to the top tube behind the stem. You can put things in there like keys, gels, energy bars.

They look awful to everyone except triathletes, but they make sense as they are easy to get to and quite aerodynamic as they sit behind the stem.

I say go for it to hell with tradition. 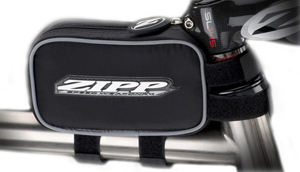 Storing your goodies in a box behind the stem makes a lot of sense. It looks unwieldy, but if you think about it, it is much better than using back pockets.

Conclusion
The best food to eat during long rides is high GI starchy carbs such as white bread sandwiches/buns and sugar gels.
Fats and proteins are too difficult to digest during exercise.
Sugary gels and drinks are best reserved for the end of the ride. Train your ability to burn fat when exercising as you have only limited glycogen reserves. Just take water on short rides. There's no need to flood yourself with sugar as soon as you begin to pedal.


Links
Cycling Weekly article about what Kristian House is eating. Not much is the answer here.