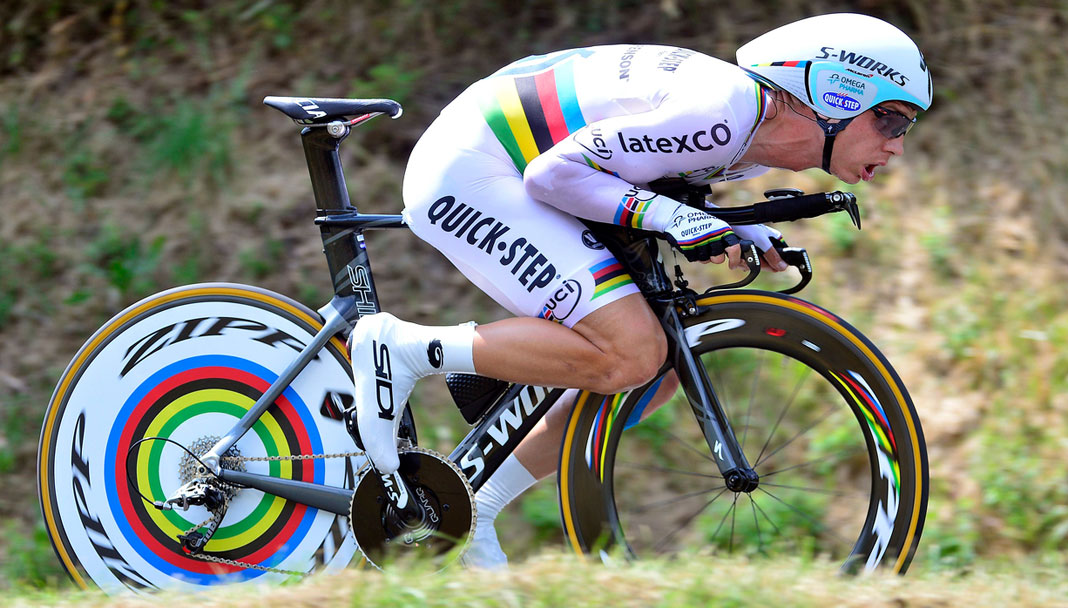 Tony Martin Stage 20 Tour de France 2014. Sitting on the top tube makes the bike difficult to control and may induce cramp. You might get your shorts caught on the seat as you try to get back up. However it reduces air resistance by about 50% which makes it an effective strategy to recover from an uphill effort.

With the aid of some basic physics we can answer this question.


We can turn again to our standard rider (from article 'Is it easier to close a gap going uphill or downhill?') to figure out the best pacing strategy. Let us imagine a 15km course that is flat with a hill in the middle of it and no wind. (see diagram). The first part, A, is flat and windless. The rider then climbs for 2km, B. He then descends for 2km, B. Finally he rides the flat windless stretch A again.

Out and back time trial course. A - Flat, windless. B - uphill. C - downhill. A - another flat windless section. Is it faster to push hard on the uphill? What's the best strategy?

We will ignore the time to accelerate to racing speed and the possibility of a sprint to the line.

If we assume a power output of 315W, we can calculate the average speed, time taken and energy used. The formula is fairly complex so I won't list it here. Please ask if you'd like to see it.

It'll take just under 24 minutes (1436 seconds) for our rider to complete our course (he's not very aero and he's a bit lardy).

What if the rider is able to increase his power by 10% (around 30W) for the uphill section, assuming he can recover on the downhill section by reducing his Watts accordingly, so expending the same total energy?

The Watts were decreased on the downhill part so that the energy expenditure was almost the same overall.

We can see that there is an improvement of 19 seconds, or between 1 – 1.5%. That's enough to move up the scoreboard a couple of places.

If we repeat the calculation for a flat out and back course with a steady wind, we can see a similar pattern. By lifting power output by 10% on the headwind portion and decreasing it on the tailwind portion, we get a 1 – 1.5% overall time reduction with the same amount of expended energy.

To answer the question: yes it will be faster to increase power on the uphill and rest on the downhill. The steeper the hill and the stronger the headwind, the more it helps to increase power.

Some riders even take this to extremes. Regular time trial winner Tony Martin sits on his top tube without pedaling during steep descents. He used this to winning effect at the Tour de France (as above, stage 20).

Drag is reduced by about 50%, which means that high speeds can still be maintained whilst recovering from a big uphill effort. Note that the position is unstable and may invoke cramp, so be sure to practice before trying it in a race.

What power can the engine produce?
However we have not considered the engine (the rider). Is it feasible to increase power by 10% or even 20%? Will doing that cause the rider to overextend himself, causing him to blow up and limp home under far reduced power?

Let us assume that our rider’s threshold power (FTP, or sustainable power for one hour) is 315W. We are now asking that rider to ride at 345W for over 5 minutes. From experience, I would say that the rider would be in the red zone after such an effort and would find it difficult to recover in 2 minutes at 290W. I’d imagine that he might be able to average 250W for 2.5 minutes to be recovered for the final run to home.

Pacing is very difficult to judge. At the start of the time trial you will be fresh and able to push the pace, but will pay for it later. Consider Chris Froome, stage 10 Vuelta 2014. He started too hard then spent the rest of the TT struggling to maintain speed, eventually finishing 10th and losing time to his rivals.

Fluctuating power is far more exhausting than constant power, and any time spent over threshold is a serious drain on resources. That’s why Allen/ Coggan came up with the concept of Normalized power, which tells us more about a ride than average power.

Maintaining constant power is the safest strategy
It would be safer to maintain a constant power throughout the TT with the hope of ramping up the pace in the last few minutes. It may be useful to slightly fluctuate power according to feel, as many people find a constant power hard to withstand.

Using a powermeter to judge effort
It is worth noting here that a powermeter is indispensable for the pacing efforts of most riders. The typical mistake will be to set off at the start of the TT feeling fresh and excited. Our 315W rider might push 400W for the first 2 minutes.

The problem is that when fresh, this sort of power feels hard but sustainable. It isn't. By minute 3 the warning lights are beginning to flash in his head. The rider begins to struggle as the legs seize and breathing and heart rate go out of control. He is forced to slow down until recovered, which might take 2-3 minutes.

During this period the rider is losing time by the bucket load. Once suitably recovered, the rider will hit it hard again. The result will be another peak and trough. The process might be repeated 3-4 times for our 15km time trial. Blood lactate will be high, perceived effort will be high and the time will be slow.

A better method is to get up to speed fast (say 500W for 20 seconds) then to maintain the steady power for the duration (315W in this case). The first 3 minutes will feel easy, but the numbers on the power meter will make him hold back. Breathing should be deep and rhythmical and heart rate should gradually reach its sustainable rate after about 5 minutes. This is the best way to run your engine for a time trial. Blood lactate will be moderate, perceived effort will be moderate-hard and the time will be fast.

You must of course adjust the pacing to take account of corners, hills and winds based on the discussion above.

It is also worth making a note about the start. The sooner you are at racing speed, the faster you will be and the less energy will be expended overall. It is therefore worth putting a bit of effort into accelerations from the start and slow corners in order to get back up to racing speed. Don't overdo it though!

Conclusion
For uphills and headwinds it pays to increase power, providing that you can recover quickly from the effort. The steeper the hill or stronger the wind, the more it pays.

The rider needs to train for riding above threshold then recovering at just under threshold to use this strategy. Extreme increases in power (e.g. sprinting up a hill) are very hard to recover from, and may well result in a slower time. You need to practice and train to know exactly how much you can ask of your body.

It may pay to reduce drag on descents by adopting an extreme position. A hard 5 minute effort to climb the hill could be (semi)recovered within 30 seconds at zero Watts.

For most riders it is a good idea to ride with a power meter so as not to start out too fast.


Links
Nice article by Joe Friel about time trial pacing strategy
A nice article about constant pacing vs going too hard, although graphs are missing.