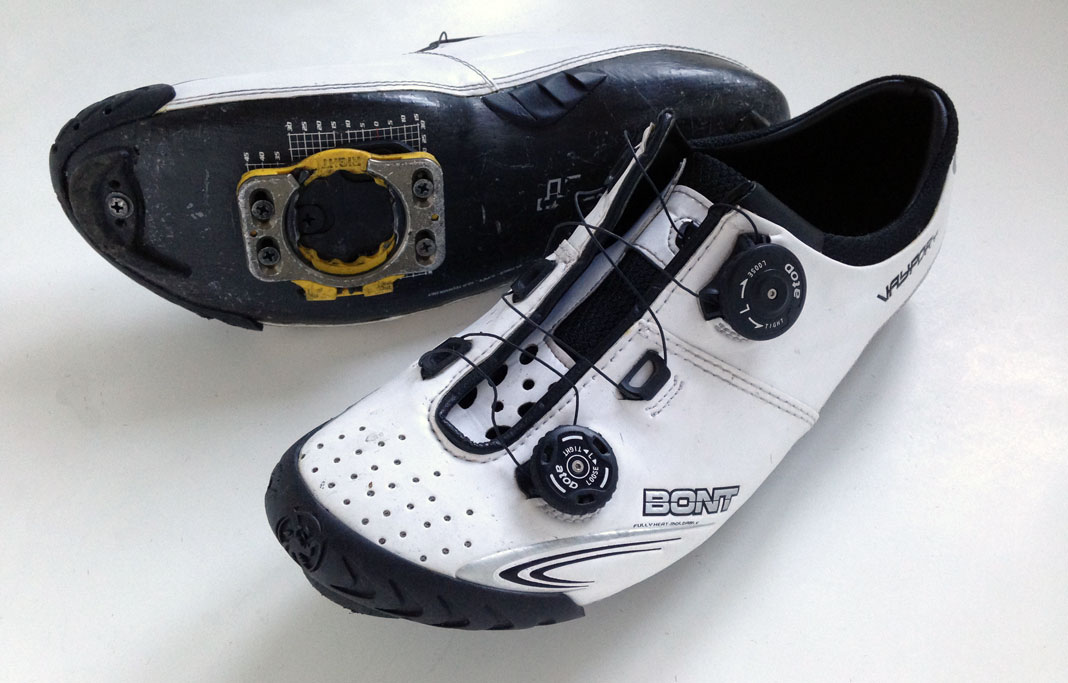 Bont Vaypor+. A shoe I could mold to my foot whist cooking my chips for dinner. Here they are in my bath.

Why did I buy a pair of Bont Vaypor +? Was it the association with a certain mobile rifle range called Sir Brad, was it the mold breaking tennis shoe design, was it the promise of a shoe I could mold to my foot whist cooking my chips for dinner, was it the boat like carbon sole that promised 'Viagra' levels of stiffness, was it the €300 euro price tag that said ‘top end’ that made me desire rather than require?


The answer is, with all honesty, all of the above.

I don't think I am alone as a cyclist that likes a high end kit; the Bont Vaypor + certainly appealed to my sense of bling when I first saw their predecessor the plain old Vaypor being ridden a few years ago. They did have a certain purposeful look and as a race shoe looked like they could be used in combat.

I was in the market to change my hard worn and very comfortable Specialized S Works shoes, other that the BOA closures requiring more regular replacement than I thought necessary I could have gone out and procured another pair but thought I would go for the Australian product instead.

I went to a high end cycling specialist in London, Bespoke in Farringdon if you are in town check them out, and had a proper fitting, initially the Bonts felt hard and quite unlike the Spesh carpet slippers I had been riding in. I nearly had a wobble over whether to purchase at all, I do have dropped arches and therefore relatively flat feet and the rock hard carbon sole and wafer thin stock innersole seemed to exacerbate this defect than support it, so in the oven they went. Well Bespoke don’t offer food (but do a nice cup of coffee) so I cant give them a critique of their cooking Michelin Star style but I must say I was underwhelmed by the amount of malleability, the difference was marginal and certainly not the foot glove I was expecting. It seems only the front of the shoe deforms to shape and the difference when everything cooled down was not what I had anticipated. Funnily enough whenever a comment is made to me about my shoes it always includes a mention of the oven ready nature of the shoes and how they must fit me so well, the reality for me is something different.

My first few rides in the new shoes proven uncomfortable, the falls of my feet ached when I kicked and whilst they were incredibly stiff and seemed to transmit every last Watt of effort into the chainset I was not sure I was experiencing the sort of sensations a novice ballerina feels when first on blocks for long performances. I do like walking and well as riding occasionally.

I returned to Bespoke as they had offered a custom footbed to go in the Bonts replacing the existing; the process involved sitting on what can be best described as an enormous breast implant with both feet until an exact copy of your foot in made. The resulting footbed and with a couple of inserts to raise the ball of my foot resulted in a much better fit, albeit €120 Euros less financially endowed.

Since my second visit to the fine folks at Bespoke I have put in about 1000 miles on the shoes; they took about 300 of those to bed down but now they are sufficiently comfortable for day long wear without gripe, the heels don’t grip your foot very well but I am advised that ‘they all do that Sir’. The closures have a far firmer action than the BOA 2 that I am familiar with and the general fit and finish is quite excellent.

As a pair of high end money no object (€420 Euro) race shoes the Bont Vaypor + get my vote, the price you seem to pay for stiffness is comfort with these shoes but the compromise is worthwhile, many owners may find that the Bonts fit out of the box but somehow I doubt that, I am suspicious that many owners of these shoes are wearing Bonts with gritted teeth, like a pair of stacked Malono Blahniks at 2.00am, suffering for their fashion.